my friend Ghada Abdel Aal, writer and political activist in Egypt, punkest feminist I've ever met (she willingly wears a veil--> accoutrement known to shutter Western fantasies of freedom), lives in Malhalla, a commute from Cairo, and she's not going to work these days. There are no buses, no trains. She's not sleeping, nor eating. Told me over skype (her 3am): "This is so highly organized, it's unbelievable. This is not a grassroots thing. This is an army game. There is all these people playing behind the curtain... I don't know who they are. That's what scares me. My feeling is the army is trying to take control of the country, so they are pushing for chaos, for a civil war. Mubarak is finished, you can see it in his face. So there's no need to cut his throat. This is much more than just some "people" not wanting Mubarak as president. I don' 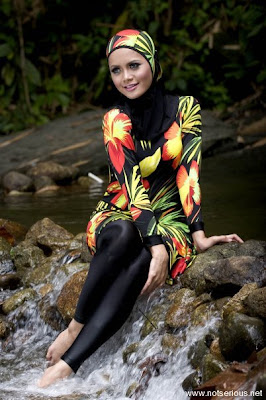 t want this country to become another Irak."
{I realize how stupid those Western stories are about "Twitter saving Egypt", "the revolution made possible because of the internets" bla bla. (I should know, since I wrote one of those before)}.
Najwan, in Palestine, says: "The idea of Mubarak- Anti Mubarak demonstrators is a Western concoction. There are no Mubarak supporters. There are, yes, gangster hired to play the part of Mubarak supporters. It's their elections security staff. But this is a shinning moment for the Arab people. I wanted to go to Egypt (from Palestine) but didn't let me in. Don't mix Israel into this. This is the Arab people living the revolution."
Ghada, in Egypt, is scared in her house. She sees darker forces approaching.
muslim swimming suit
Publicado por Unknown en 3:51 PM

As an anthropologist I find it great to have first hand news from the field one cannot find in the papers reports. That Ghada "wilingly wears a veil" & the comment it "shutters Western fantasies of freedom" is enlightning for our understanding of both Muslim & Western traditions.