by Srta.Pola for El Fashionista

I took off from Tenerife to London with a .doc named Shoe Love story titillating on the Word app built-in in my head. I was haunted by the images of the Alexander McQueen show (saw it first on 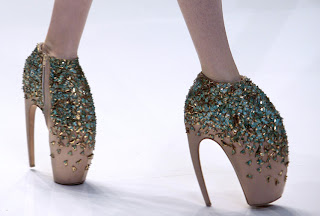 El Fashionista): more than an amazing fashion collection, it was the experimental sketch of a brand new species of amphibian ladies from the future –but the shoes, alas, the shoes! They were maddening up everything, as in conceptually-over-the-top. Those shoes implied a mutation, something that went beyond the simple hybrid (the anphibian creature), and reminded of that very passage that forces science-fiction into bio-genetics: I mean, it didn’t merely set out to imagine a transformation, it enacted it by operating directly on the body… I was glacing through Vogue Paris in the plane and revising mentally the caché at Style.com, the versions of Pliny the Elder and Plato on Atlantis (that many allocate in the Canary Islands, that I was leaving behind), and thought: heck, if archeologists analyze the writing of old civilizations, well they could properly examine the shoes, since they’re the fountain pens of the body, leaving traces of the self. Why was The Shoe such a key-device to figure out a civilization? What is the fascinating nature of shoes, why are they so inherent to feminity, and personality… in short: which was the missing link between the soul and the shoe?

As soon as I landed in London, I duly pilgrimed to the modern shoe sanctuary: Nicholas Kirkwood, on Morocco Street. A ravishing beautiful blond, cat-eyed like Sasha Pivovarova, 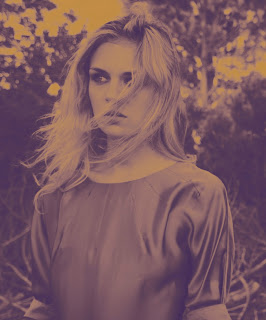 passed in a hurry and I heard a heavily Russian-Eastern Europe dyed accent, that reminded me of Greta Garbo in Ninotchka… could it actually be Sasha?? When she told me her story, I thought it was even better (though i did began hating myself for leaving my iphone in the hotel). Dressed simple but very chic (Topshop tshirt, black miniskirt on black leggings), Kasia Tkaczyk revealed being a former model original from Poland, who had studied French Lit and Business in Sorbonne –“6 years in the university so as to make up for the heavy partying of my model years in Paris”, she tells me giggling. At 28, she was in charge of finance of maison Nicholas Kirkwood, Brittish god of shoes and guru of hipsters all over the world (that the Mulleavy sisters dressed the bony feet of models in Rodarte’s latest collection on NY Fashion Week, and that celebs go trotting around red carpets in Kirkwoods, are some signs of this fever). Kasia takes a Kirkwood knock-off and teaches me a new way of looking at shoes:

- See the platform? Look at the evolution of the platform: first, in the winter 08 collection, the platform draws this way in the space –then, in 09, the curve of the platform goes on to dialogue with the upper side of the heel. In these shoes, evolution went towards the light… you walk and, because of the mirroring surface on the platform, it shines back at you as you walk. 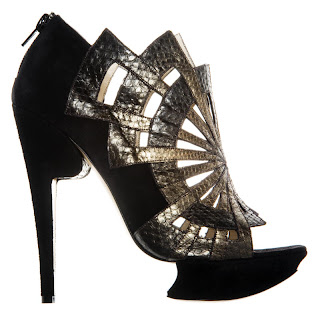 pieces of exotics hand-sewn in Milan (Kasia has a pair, oh blessed those who work for Nicholas!). She hands me a pair to try it on, I take off my humble Mischka heels, and close my eyes when I feel the delicate touch of the skin… already standing, I don’t even feel them on, and the shinning back works its magic as I fancy myself emitting golden trails. It’s a work of art, of artisan-ship and time, and at the same time is pure vanity that makes you oh-so-tall and instant kilometer legs. Kasia must have seen my ecstatic countenance, she adds:

- At this level, of high-end fashion, it’s not about commercial products: they’re works of art.

Every angle is a space for creation: everything transforms as we step, our bodies transform and get a rush of secret energy, because shoes take us where we want to go, and they are also instruments 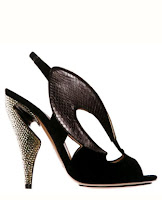 for us to ran away from what we dislike. Aren’t shoes pieces metaphor of feminine existence?, I muttered, as I walk away from the mirror with my golden shoes flashes popping about the carpet.

Chatting with Kasia is great because it’s always fun to deal with fashion matters –so banal to the non-initiated- with utmost depth. She tells me how Asia is setting off to become a major luxury producer (see Alexander Wang's Spring 09, everything made in Asia); she tells me how 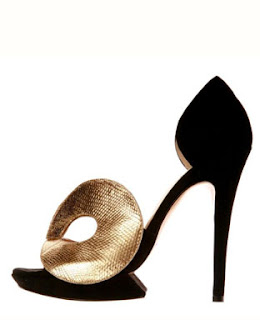 exhausting are Paris Fashion Weeks for her, she barely has time to go to parties because she has to be up at 7am in the shows and talking to clients. She likes cooking shrimp soup, wearing American Apparel’s white cotton tshirts (“I was in Miami for vacation and got myself a few, they’re cloudy-soft). We talk about Gossip Girl, which we love, about McQueen (“such a major genious”, says Kasia with a hint of devotion in her feline grey-blue eyes) and we agree that Manolo Blahnik is been doing quite boring shoes for the past years… always the same heel, too lady-like. She likes Giuseppe Zanotti, but she doesn’t wear Christian Louboutins because the width is fined down and it makes it painful: “you can’t let a shoe betray you at a party”, she concludes cathegorically. For her, the best of working in fashion is expressing herself through fashion. Next year she’s getting married to a fellow Argentine guy, and she already bought her designer dress, but we can’t put THE name here because her fiancè –despite utterly illiterate in the connaissance of fashion like

most boyfriends and lovers- might google it, and she adds in her Ninotchka accent: “oh I’m very traditional, I don’t want him to see my dress nor even on Google!” 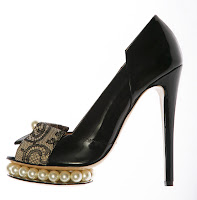 Kasia tells me Rihanna has asked them for shoes, but her size is 42 and they only make till 41. I never imagined that my trip to London, and all the delirium that began with the amphibian phantasies by McQueen, would end up with me plunging in a cobweb of sweet identification with Rihanna. She can’t trot around the world on Kirkwoods because her feet are a weeny bit too big, and I can’t either because they’re so marvelously expensive! :D