by Pola Oloixarac for BBC World Service, The Cultural Frontline. 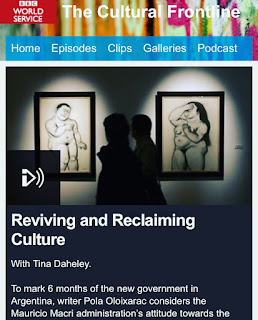 New cultural winds are blowing in Argentina, as President Mauricio Macri’s  government, elected 6 months ago, begins to assert its authority. Already, many signs point to a particular trend on the rise: the playful art of the 1960s is making a comeback.

The first thing the new Minister of Culture did was launch a major retrospective of the Argentinian artist Roberto Plate, at the Museo Nacional de Bellas Artes. Mr. Plate is a painter who was part of the Di Tella Institute, an almost mythic avant-garde centre that operated in Buenos Aires between 1958 and 1970. More recently, the Museo de Arte Moderno also staged an exhibition looking at the art of 1960s Argentina and displayed Martha Minujin’s “La Menesunda”, a labyrinthine structure that Minujin and Ruben Santantonin , originally showed more than 50 years ago at the Di Tella. There will also be tributes being paid throughout the year to Alberto Ginastera, one of Argentina’s greatest 20th century composers at the Teatro Colon, Argentina’s national opera house. Back in the day, Mr Ginastera served as the director of the Contemporary Music Center at, of course, the Di Tella.

The Di Tella Institute was founded by a family of Italian industrialists, maigrant workers- rather like the family of President Macri, in fact- who, after amassing their fortune turned their gaze to the gifts of symbolic capital, of art and politics. The Di Tella and the rest of the avant-garde flourished in the 1960s under the administration of then president, Arturo Frondizi. And it’s no coincidence that Frondizi is the only former president Mr Macri admires.  Frondizi and the Di Tella Institute encouraged a window of social and political liberalism that was later smashed by a wave of darkness, with a radicalized guerrilla and a string of dictatorships. And when they looked back, the intensely political youth of the 1970s frowned on the swinging sixties’ pop-art scene of the Di Tella. Films such as “La hora de los hornos” (The Hour of the Furnaces, 1968) depicted the Di Tella artists as fatuous bourgeois, because their art was not considered political enough.

According to gallery owner and art savant Jorge Mara, “the 1960s saw the only strong art avant-garde Argentina can boast about, where our artists were part of a larger global movement; and in recent years, we’ve been receiving a lot of international attention for work from that period”.

Argentinians are familiar with governments using the past to try to influence the future. Indeed, during the Kirchner era of the last 12 years, cultural life was dominated by references to the 1970s: it was almost like a mirror where the Kirchners liked to reflect. And their supporters still do. During the first hundred days of Mr. Macri’s government, many of the artists who oppose him have summoned up memories of the desaparecidos- the victims of the 1970s Dirty War who were killed and disappeared without trial. Many cultural pundits have declared the Minister of Culture, Mr Loperfido, persona non grata for questioning the number of people secretly imprisoned and killed by the military Junta, forty years ago. An absolute figure has never been established: Abuelas de Plaza de Mayo, among other organizations, estimate the number of people killed during the “Dirty War” ” at 30 thousand, but other human rights organizations have suggested it’s probably closer to around 10 thousand. “Loperfido shouldn’t have said that, because it’s taboo”, an artist told me. “Everybody knows the 30K number it’s not true, but you’re not supposed to say it”.

Yet challenging long standing narratives and fixed perspectives is becoming a staple among younger contemporary artists. Recently at The Malba Museum, a work by conceptual artist Leandro Erlich appeared to decapitate the Obelisco (a Buenos Aires landmark). In a piece he called “The democracy of the symbol”, Erlich created an illusion that chopped the top off the monument and deposited it on the Malba esplanade. Inside the structure, he constructed a view of the city as though seen from the top. Marta Minujin had also worked her magic with the Obelisco: during the dictatorship, she presented the monument laying down, as if defeated. Last September, the apparently beheaded icon of Buenos Aires by Erlich was met with shock and awe.

And playful iconoclasm is certainly part of Mr Macri’s communication strategy: in a move that scandalized many, a few days after he took office he let his dog sit on the presidential seat, took a photo and posted it on Instagram. “I think we now have a concept of the future, an openness closer to the liberal 1960s than with the super politically charged1970s”, said Victoria Noorthoorn, director of the capital’s Museo of Arte Moderno.

We may not have escaped from ‘the cult of memory’- as historian David Rieff calls it- but Argentines are now welcoming the freedom to play around with symbols.

I, for one, welcome the rise of irreverence over dogma -even if it means giving a dog a throne, on occasion.
Publicado por Pola en 10:13 AM